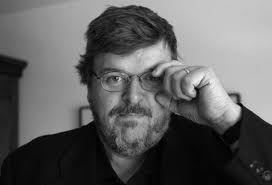 America’s first celebrated documentary filmmaker from Michigan, Robert Flaherty, made the film, Nanook of the North, in 1921.  The film was made twice.  Smoking while working in the editing room, an ash from Flaherty’s cigarette ignited the nitrate stock and 70,000 feet of film went up in flames.  The desperate man’s hands were severely burned in trying to save it.

Depicted as a harpoon-wielding hunter, Nanook had begun to use a rifle as one of his tools for survival.  Robert Flaherty would have none of it, and insisted that he use the harpoon for the purposes of the “documentary” film.  The truth of Nanook’s existence was manipulated for the purposes of popular entertainment, masquerading as an honest portrait of a man and his time.  Perhaps it’s unfair to fault Flaherty for skirting the truth, after all, he referred to his films as “docufiction”.  But where is the verisimilitude of reality in nonfiction filmmaking?  Is it all just a ruse designed to deceive?

I am going back even earlier in history for my inspiration and search for truth in film, citing one of the very first films ever made, Exiting the Factory.  Made in 1895 by the Lumiere brothers in France, this film is an honest look at workers as they file out of their workplace following a hard day on the job.  Nothing is manipulated.  The camera stands as a silent witness while one of the brothers, Auguste or Louis, hand-cranks their machine.

When I purchased a new camera three years ago, I placed it on a tripod and pressed the record button to document a scene in my studio.  I stepped in front of the camera and remotely triggered it to begin.   At the end of a long day spent editing, this was my own version of Exiting the Factory. As with Robert Flaherty, I was smoking also.  However, in this case, nothing caught fire, only my imagination which blazed with the possibilities of new and honest work.  The camera would become my microscope, telescope, and more.  In the maze of circuitry hidden behind the glass lens was a tabula rasa which I intended to inscribe with the truth – at least my own version of it.